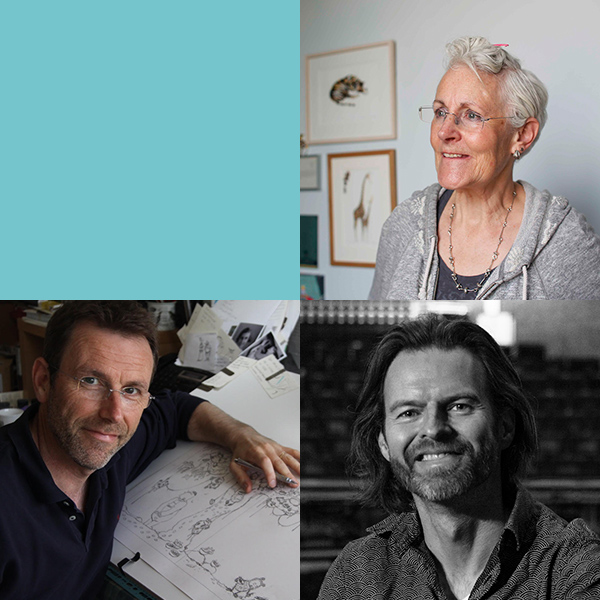 Believable characters, a strong story, emotion, continuity, settings… all of these are important when creating a picture book for children. Is it hard? Is it easy? Do you begin with the story, or with the pictures? Where do you find ideas? There are so many questions to ask, but David Melling, a picture book illustrator/author for almost 30 years and Vivian French, a writer who has taught picture book illustration at Edinburgh College of Art for more than a decade, will give you tips and techniques, as well as encouraging experimentation, and offering professional advice.

David Melling grew up in London, becoming a freelance illustrator in the 1980’s. From there, he worked for several animation studios as a background artist before turning to children’s books in the early 1990’s. In 2001 he wrote and illustrated his own picture book The Kiss That Missed which was shortlisted for the Kate Greenaway award. In 2004 his picture book The Tale of Jack Frost was made into a half hour TV film. He is probably best known for his Hugless Douglas series. To date he has produced over 150 books in over 30 languages. Ruffles is his first new character with publisher Nosy Crow. www.davidmelling.co.uk

Vivian French has written more than three hundred books over the past thirty years; before then she was an actor and a storyteller. She is the co-founder of Picture Hooks, a project that supports emerging picture book illustrators, and has been visiting tutor in illustration at Edinburgh College of Art for over fourteen years. She was awarded an MBE for services to literature, literacy, illustration and the arts in 2016, and the Scottish Book Trust Outstanding Achievement Award in 2018.

On graduating from Glasgow School of Art, Ross Collins won the MacMillan Prize for his first picture book. Since then he’s illustrated over 130 books for children and written about a dozen or so. Children in over 25 countries seem to enjoy them. Some of the glittering awards Ross has won are the UKLA Award, the CILIP Amnesty Honour, The Royal Mail Book Award and the Scottish Children’s Book Award. He has been twice short listed for the CILIP Kate Greenaway Medal. Ross’ book ‘The Elephantom’ was adapted into a critically acclaimed play by those clever people at the National Theatre who made that ‘War Horse’ thing. Ross lives in Scotland with a strange woman, a hairy boy and a stupid dog.

If you want to attend a course with a family member, or someone within your extended household please do let us know and we can arrange use of our former twin rooms. These are available at £600 per person.