The Scottish Book Trust new writers were with us recently. One of the recipients,  Sheila M. Averbuch, has written about her experience at Moniack Mhor and has kindly allowed us to share it here. 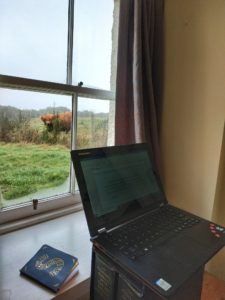 They say you enjoy dancing most if you do it like no one’s watching; my wise friend Louise says the same thing about writing. If I want to take chances with my work in progress, just write it for myself, as if no one else will ever read it. But taking a chance with a manuscript is hard when you write in the cracks of the day, as many of us do. I devote an hour and a half every morning to my fiction, before my copywriting day starts, but that’s still not enough time to do the scariest things: like, say, delete my first chapter because my agent would like the story to be a bit more nippy.

Last month I went to Moniack Mhor, the writing centre near Loch Ness in Scotland, for a writing retreat that comes along with the Scottish Book Trust New Writer Award, which I miraculously won this year, after five years of trying. I suppose a lot of the writers who come along to the retreat are nervous; what if I get nothing written? What if the other writers don’t find me agreeable? What if, say, I discover after a full week of the writing retreat that my next-door neighbour heard me muttering non-stop through the wall as I read my entire manuscript aloud to myself?

Unfortunately I didn’t find out that last part until the final day (SORRY, Angela), but note to self: mutter much, much more quietly next time.

At any rate, there was no need to be nervous, because the Moniack retreat turned out to be the best week of my writing life. I might not even need to use the word “writing” in that sentence, but my children and husband may read this, and since they were kind enough get on with things at home for week without me, I shouldn’t say so categorically that things like my wedding and their births were lowlights compared to Moniack, but honestly – what a week.

First of all, something you won’t see in the Moniack marketing material, because they’re too modest: the staff are transcendently brilliant. They are passionately committed to the guests who come to stay. They remove every barrier to writing: the bedrooms and common rooms are comfortable, the open fire and separate hobbit house are gorgeously cozy, and the farmhouse kitchen is a joy. 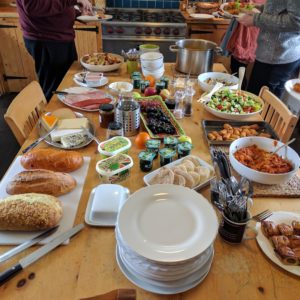 For our retreat, not only was the kitchen stuffed with help-yourself breakfast foods, but Jillian the genius chef also came along at lunchtime and magicked up a huge feast that covered the giant wooden table, with hot and cold dishes. The same table was then cleared and whoever was on dinner-making duty (my and Marjorie’s night was Wednesday) was presented with everything to prepare a meal for 10, from the easy-to-follow recipe to the beautiful heads of broccoli to the garlic crusher. It was all idiot-proof, which was just as well, if like me you’d been writing like a demon for hours.

Boy, did I write. Because a week stretched out ahead of me, with limitless writing time and no responsibilities, I was able to try the terrifyingly risky move of deleting my first chapter. If it didn’t work, I still had the rest of the week to figure out how to make the beginning of the book more nippy. I’d already toyed with making chapter 2 into the opening, anyway, and here was the chance to try it.

That’s the beauty of Moniack Mhor. I could write as if no one was watching, because apart from that cow you see up top, no one was. And it’s not just the staff who are brilliant. The other writers in our group — who were all either New Writer Awardees past and present, or had won an Ignite or Next Chapter Award –- were accommodating and patient and thoroughly understood each other. When people nipped into the kitchen for another cup of caffeine, the conversations were lovely and genuine but always brief, as we were all keen to get back to whatever we were doing, be that wrestling with chapter 5 or doing research online (the excellent Wi-Fi, reference library, and fully stocked printer station provide everything you need to stay productive).

You weren’t looked at askance, either, if you chose to disappear straight after the evening meal and write more, or if you set off on a half-day hike for inspiration rather than chaining yourself to the desk for the duration. The team there, and the other attendees, understand that not everyone loves to hobnob and network and chit-chat; some folks prefer the company of a good verb to people. And that’s okay, too. Moniack is writers with writers, looked after by a brilliant staff (many of whom, I found, are also writers): it’s how the world really should be organised, in my opinion. And yes, it was the best week of my life.

Eternal thanks to the Scottish Book Trust for the New Writer Award supported by Creative Scotland, and to Rachel and the entire team at Moniack Mhor. Please, may I have some more?

Sheila M. Averbuch is a former journalist who’s interviewed billionaires, hackers, and the guy trying to send humans to Mars. She writes children’s fiction for middle grade and is a 2019 recipient of a New Writer Award. You can follow her on Twitter.