Claire Askew was the 2017 recipient of our Jessie Kesson Fellowship, and was writer in residence at Moniack Mhor during the month of March. We asked Claire a few questions about her time here. 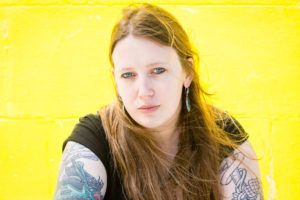 When did you first find out about the Jessie Kesson Fellowship?

I’d been aware that it was a thing for several years — I knew of some of the writers who’d benefited from it before, and it was something I daydreamed about one day applying for.  I used to be a further education lecturer, and then I became a freelancer — so the idea of a whole month of uninterrupted time to write seemed like an impossible pipe dream for many years.

Was this your first time applying for it?

Yes!  I wasn’t ready for it until 2017.  But then the planets aligned: I had a project (my second poetry collection) that I really, really needed time to work on… and for once, I was actually in a position where I could spend a full month in a cottage on a mountainside, writing poems.  I thought that applying was a total punt, but in recent years I’ve tried to make myself apply for anything I’m eligible for.  Turns out, it’s a tactic that works — I was absolutely gobsmacked when I was successful, and really pleased.

How did you select the piece you used as your submission?

I had quite a specific brief for the residency, going in.  I wanted to write a collection of poems entirely about one thing: the true stories of real historical women who were accused of witchcraft.  I’d already written a few exploratory poems in this vein and so sent those, as a way to illustrate where I wanted to go with the project.  So the selection was easy.  What then happened, though, was when I arrived at Moniack Mhor I found that there were all sorts of other poems in my head that wanted (if not demanded) to be written… so it wasn’t as straightforward a writing process as I had first envisaged!

It was absolutely amazing.  I felt really honoured to be taking up a fellowship that bears Jessie Kesson’s name.  She was such a brilliant writer and such an inspiring, literally awesome woman.  I immediately felt like I had to do my best work in order to do justice to her legacy.  And I was very grateful to the fine people at Moniack Mhor for seeing the potential in my work and my application, and deciding to invest in me.

You had a bit of an adventure on your way to Moniack Mhor, didn’t you..?

If you mean that I accidentally drove to Dundee, then yes, I did!  But it was a blessing in some ways.  After the initial panic I was able to detour via Blairgowrie and Pitlochry and drive through some amazing views of the Cairngorms, which helped inspire the first poem I sat down to write at Moniack Mhor!

What were your first impressions of Moniack Mhor?

I think I arrived at about the best possible time on what had been a really gorgeous sunny day.  I arrived at about 5pm, just as the sun was setting — if you’ve ever been to Moniack Mhor then you’ll know it serves up some truly breathtaking sunsets.  At the top of the track, a Highland cow popped his head over the fence to say hello to me as I arrived.  And then when I got down to the cottage, the stove was lit and the kitchen had been well stocked with biscuits.  I wrote in my journal that night that the cottage “has a kind energy.”  If it doesn’t sound too cheesy, it felt a bit like coming home.

Did you find it easy to settle into a writing routine?

I did.  I’d resolved to write every day, and quickly began to average at least one poem a day, sometimes two.  What I noticed was, for each day I sat down and wrote, the easier the next day got — I noticed the accumulation of practice.  At first I was rusty — by the end of the month I was fluent.  The writing got better as well as easier.  People aren’t wrong when they talk about this daily writing lark — it really does work.

How much inspiration did you draw from your surroundings at Moniack Mhor?

A huge amount.  I don’t think I realised how much until I returned to my regular life and found I had to work so much harder to generate the writing.  In the cottage, I was surrounded by the hundreds of poetry books in the Moniack Mhor outpost of the Scottish Poetry Library, and felt like I was surrounded by friends.  And beyond the cottage I had the amazing surroundings of Moniack Mhor.  Anyone who’s visited will tell you it’s a bit of a magical place, and they’re not wrong.  I think my favourite thing about my month was watching the evolution of the mountains, which were the first thing I saw every morning when I opened my curtains.  They never looked the same twice.  I watched the snow gather on them and then melt; I watched the shadows of clouds move over them; I saw them turn every colour of the rainbow in different light and weather.  I could have written a collection of poems just about looking at the mountains, I think.

Did you get a lot of work done?

I wrote the best part of a poetry collection manuscript, in a process that felt fast and bewildering — I still can’t believe how much I got done.  It also isn’t the poetry collection I thought I’d gone away to write, so I had to do a lot of thinking — or rethinking — about the general trajectory of my poetry.  Being at Moniack Mhor helped hugely with that, too.  I had a lot of space to just think.

Would you care to share any of it with us?

One of the reasons that I ended up writing a slightly (and by slightly, read: radically) different collection to the one I’d proposed to write when I applied, was… I was going through some Personal Life Dramas while I was at Moniack Mhor.  I think that’s reflected these two poems, one of which is about a wonderful lady I met in one of the workshops I ran at Birchwood Highland during my time at Moniack Mhor.  The other is just my attempt to capture what it was like to be in the cottage, and my feelings in the last week, about having to leave.

(You can find the poems after this interview)

All in all, how was your experience at Moniack Mhor?

It was, honestly, life changing — I am so grateful to have been given the opportunity.  I must give a shout out here to all the amazing Moniack Mhor staff, who were incredibly friendly and supportive and kind throughout my stay.  A special shout out to Heather, who helped me out in more ways that I think she can ever know!  I miss you guys and I want to come and hang out with you again soon!  I was also lucky enough to get to meet some incredible writers while I was in residence — all the Scottish Book Trust New Writers who came to stay, thank you for your company and brilliance!  And I loved running workshops for Birchwood Highland, too — I met some fascinating local folk and heard some truly incredible writing from them, and feel privileged to have done so.  To be honest, I’m still amazed I actually managed to leave.  I was sure I’d need to be forcibly evicted!

You’re a half-shut knife, the woman
in the neat scarf says.  I’m looking
at the miniature bolts that hold
her natty glasses in the shape
of her face.  She’s saying it
as an example — you’re a half-
shut knife, that’s whit ma
Banff granny used tae say —
but she’s right.

I’m a half-shut knife: not quite
awake, moving in an unscrewed slope
through these rooms, their squares
of blue light.  I’m a blunt
edge, folded in the lonely oilcloth
of my bed, not closed but also
never open — zoneless, gutless,
cutting no mustard, splitting no flesh —
in control of essentially nothing.

I’m looking at those
two silver crossheads catching
the light: this woman’s eyes
green earths towed
by their own tiny moons.
She’s laughing at me, this wifey —
wise old dove crooning
in Gaelic, appraising me in ways
she knows I understand.  Aye.

I’m half-shut knife, alright.
I’ve dropped from the pocket
of my old life — my white bone
handle, scratched lines
thumbed dim on my slight blade
right up to the kick — my loss
mourned by no one.
Where is the man whose hand
I could be folded in?

But my new friend is quiet,
her eyes like marbles
in a riveted jar.  Sure, I say,
a half-shut knife.  Closure
is all I’m looking for.

Because I’ve walked up this mountain,
I can look down at my life
like it’s a town: white-painted houses
jumbled as teeth, one streetlight
flickering pink at noon.  Everyone’s
moved out.  There’s a shining city
somewhere I can’t see,
but I feel its pull in the planes
unzipping this glen’s big sky.  South,
south, cry the geese in their jagged ranks.
Everything’s going home except me.

Christina visits, tells me the trees
are in leaf — brings a dark cake
in a cardboard box.  She’s reading
a book where a woman wakes
on a mountainside to smooth, clear walls
grown all around, says, everything
beyond the wall has died.  I touch
the spine and recognise myself,
pacing the perimeter with sticks,
marking the limits of my hurt,
where it starts and ends.

What’s dead is dead.
There are things I can’t
make happen, no matter the signals
I send up: my shot flares drop
into the valley and the sheep
don’t even raise their heads.  It’s spring,
the season of snowmelt and uptick,
hills flinching off their embroidered veils.
I can’t stay, have to find the route
back — thin path the new
green rain has washed away.

Could the woman just climb the wall?
I ask, but Christina’s gone.
In my old town all the doors
are locked, the yards overgrown.
I’ll strike out unwanted, not
worried about, carrying nothing
but those markers I’ve ripped up
like roots.  Watch me shrink
to a syllable in the land’s
damp mouth.  Watch me head —
in spite of myself — south.