Life in the Time of Coronavirus #6

The Moniack Mhor Writers Group, led by Cynthia Rogerson, has been meeting remotely during the Lockdown. They have been writing pieces inspired by the situation. Today’s piece is written by Karen Lean. 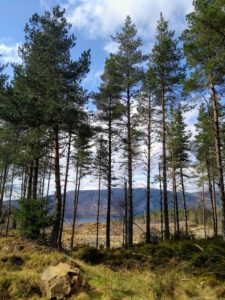 Life in the Time of Corona

One day a bad thing happened. As the weeks went by it went from bad to worse. It spread and spread until throughout the world there was chaos and death. Dolphins were seen swimming up the canals in Venice. Deer wandered nonchalantly into towns where they had never gone before; even stepping delicately into shops. Feral goats left their cliffs and nooks to clatter like unruly children through villages they had never previously ventured into. Squirrels stopped looking left, right and left again before crossing the road. Pollution levels went down. The songs of whales were no longer drowned out. In cities the loudest sounds were the singing of birds, until the people rose in evening chorus to give thanks.

One day a bad thing happened and blame was cast and not one person was to blame, but everyone was to blame. It was biblical in proportions and followed the floods, the fires, the plague of locusts. Some said it was a sign, a warning, a punishment. Some did nothing but complain.

People began to smile and wave at strangers they passed in the car. When they met in the street they stood far apart to talk but conversed more meaningfully. Everyone remembered they had neighbours who might need them and rang them up, or left notes and gifts in letterboxes and on doorsteps. Nobody was forgotten. The invisible were seen and the lonely found friends. Busy people became idle or took up crafts. Important people became superfluous. Jet setters were grounded, leaving more room for commuting birds. Hairdressers twirled on their customers empty chairs then went home to do yoga and phone friends. The normally well groomed now wore hats to cover their hair and no one had a fake tan or scary nails. The trendsetters didn’t even get dressed. People began to ponder over what ‘essential’ really meant. Families settled feuds that were stiff with age. Dogs were very happy as their owners always wanted to go walkies now.

One day a bad thing happened and many people were scared to leave the house. Many people would not stay in their houses when it was safer for everyone that they did so. Medical supplies were in the wrong place or had run out. Outpatients worried about their treatment getting stopped. People hoarded food and fought over toilet rolls. Empty shops were broken into and new scams were cooked up. Vandals still vandalised. Spitting at policemen became more common. Overcrowded prisons even more under staffed. Riots were feared. A frightening new vocabulary was born – lockdown, pandemic, self-isolation, physical distancing. Unprecedented became the norm. The most important measurement was two metres long. People lay in hospital corridors dying, everywhere, not just somewhere else.  Weddings were forbidden and funerals were not attended. No one knew what was happening in the refugee camps. No one knew very much for certain.

Gleaming, hi tech kitchens previously unused for cooking became rich with the smells of freshly baked bread and rich tomato sauces. Invention became the mother of necessity in every home. Make do and mend became the trend. Corner shops were suddenly valued and local business prospered. Neglected gardens were tended and soon flourished with flowers and fresh fruit and vegetables. Even those who didn’t usually like getting their hands dirty joined in and were surprised how satisfying it was. People appreciated nature more and saw their place in it; saw how they were both significant and insignificant. Writers got peace to finish their novels. Music rang out from gardens and balconies and over the wires. Children spent unfettered time with their parents, playing and learning new skills as well as continuing with schoolwork.

For the first time ever the people of the world became united in one common aim and had no time or resources for squabbling and bloodshed. World Peace and ceasefires were talked about.

One day a bad thing happened and it wasn’t all bad.