Life in the Time of Coronavirus #11

The Moniack Mhor Writers Group, led by Cynthia Rogerson, has been meeting remotely during the Lockdown. They have been writing pieces inspired by the situation. Today’s is by Karen Lean. 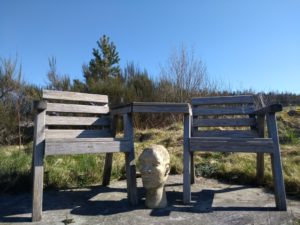 Good Friday
I managed to go into the Co- op tonight, for the first time in weeks. I’d driven by countless times, slowing as I passed, counting the folk waiting in the car park, trying to brave it, turn in. It was like a still from The Day of the Dead, or something. All those figures standing apart, watchful, still, not chatting; they looked like humans, but they weren’t acting like humans.  Not in any discernible queue either – how did it work?  I wondered. I’d been warned the new regime was twenty in at a time. Except when Johnnie Thorn was on the door because he lost count, someone said, and Della would be running up and down the aisles in a flap shouting ‘Don’t let any more in Johnnie!’

But how did you work out when it was your turn anyway? My flustered mind fussed. One time I nearly plucked up the resolve, but spotting a police car parked there was enough to make me cruise on by. I wasn’t a criminal, I had legitimate ‘essential’ purchases to make, no logical reason to panic. But it just put me over the edge. In any case it was the challenge of overcoming my fear that had been pushing me, not any desperate need for a particular item.  We would make do with what we had. Again.

But tonight I was on a mission. There were no milling zombies in the car park. No guard at the door, it opened magically, like normal. Whew, I clapped myself mentally on the back. I’m in. A young blond lad with an unformed face danced past me wild-eyed, skittish as a horse seeing a threatening object. He’s too young to be so openly nervy I thought, surprised. A young assistant stood near the entrance wiping items with disinfectant. I didn’t recognise her from working there but thought her face was vaguely familiar – perhaps she was one of the many hotel workers now out of a job and trapped far from home, worrying about those she had left behind. We caught each other’s eye and exchanged a tiny hesitant smile. I relaxed a little. Then I saw the yellow and black tapes across the floor at the entrance to each aisle. It looked like a crime scene. Can I not go up there? I panicked until my rational self intervened and I decided this was for when it was busier and people were halted singly and made to wait until the aisle was safe to enter. At two metre intervals there were also the same stickers taped into cross shapes, X marks the spot. God, it’ll be on our doors next and the masks will be like a lepers’ bell. That, or an accusation.

I began to relax in the unusually quiet atmosphere and adopted my customary aimless saunter, trying to block out all the empty shelves and concentrate on the full ones. Archie from the bank served me. I was confused. He didn’t work there, his partner did. I could have asked him I suppose, but he looked so uncharacteristically sombre, almost grim. I didn’t feel he wanted to talk. The bank was still open, albeit on reduced hours – was he bored, or was he filling in for his partner – was his partner ill, dead?  Perhaps Archie was working there to feel closer to his lost love; sitting on the very same stool, serving the very same customers, wearing Charles’s navy blue fingerless gloves that he always wore, winter and summer…

When I got outside the air felt tense and heavy, like Games Night after a hot day, when the heavens could easily open and trouble was brewing in the pubs, waiting to explode onto quiet streets. No zombies though, I thought, that’s good.

Back home I hid my husband’s Easter egg under a blanket on the back seat, hoping I would remember to retrieve it the next day if the sun came out. I clanked in with my other purchases – ‘Fancy a beer?’

We caught up on each other’s day and I told him about Archie serving me in the Co-op.

‘Oh yeah’, said Sandy, ‘I asked him about that. He’s given up working at the bank. The travelling to Perth on the days our branch is shut was too much hassle.’

‘Do you think we’re allowed to deliver Easter eggs on Sunday or will we get stopped by the police and sent home? I asked.